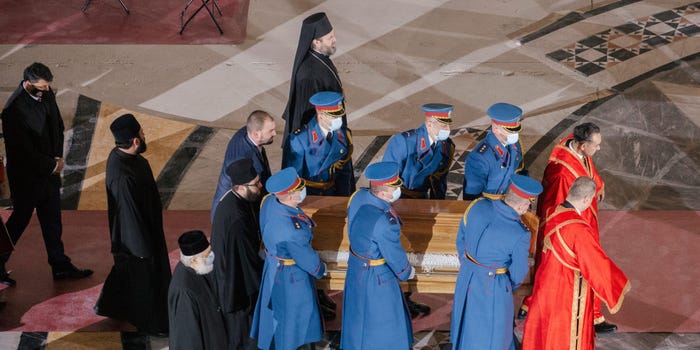 Patriarch Irinej, the head of the Serbian Orthodox Church died on Friday from COVID-19, the disease caused by the novel coronavirus, the church announced in a statement.

Irinej, who died at the age of 90, was admitted to a military hospital on November 4 with COVID-19 three days after he attended the open-casket funeral of a top cleric, Amfilohije Radović, who had also died of the virus. While Balkan nations had largely avoided widespread outbreaks of the novel coronavirus in the spring, some have seen a surge in recent weeks, The New York Times reported.

"I was honored to know you. People like you never depart," Serbian President Aleksandar Vucic said in a statement posted to Instagram.

On Thursday, the Serbian Orthodox Church had announced that Irinej had been intubated following a worsening of his condition.

According to The New York Times, Irinej, born Miroslav Gavrilovic, became the 45th leader of the church in 2010. He was known for his conservative stances on abortion and gay rights, and once in 2019 condemned thousands of people who had protested the country's president.

According to a report from CNN, video from Radović's funeral service, which took place in the Balkan nation of Montenegro, showed few attendees wore protective face masks. Many people kissed Amfilohije's body, which is customary, according to the report.

Neither Irinej nor any of the priests that performed Amfilohije's liturgy wore masks, CNN reported. Thousands of people attended the service, according to The New York Times.