At least 20 detectives are investigating the Adelaide pizza shop where an employee on a temporary graduate visa lied to contact tracers, plunging South Australia into the hardest lockdown in the country.

Police have revealed the worker, who initially claimed he was a customer at the Woodville Pizza Bar in Adelaide's north, is a 36-year-old Spanish man, lawfully in Australia on a temporary graduate visa which is due to expire in mid-December.

"There is a spotlight that has been shone on the pizza bar as a result of these circumstances … We are interested in speaking to at least two other people who we believe can assist us with our inquiries, and my investigators will remain in contact with those in due course," South Australia Police Commissioner Grant Stevens said. 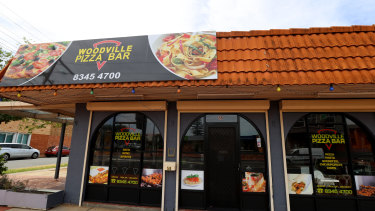 Police boosted patrols at the pizzeria after the Premier said an employee’s lie had resulted in the SA lockdown.Credit:Getty Images

"I can't elaborate any further in relation to the circumstances, this is obviously now an ongoing investigation."

A hard lockdown in South Australia is due to end on Saturday night, three days earlier than originally planned after authorities uncovered the pizza shop worker’s lie.

Authorities originally thought the man in question had contracted the virus after buying a pizza from the shop, leading to concerns about potential widespread community transmission and a possible "super strain" of the virus being passed on via surfaces.

Instead, the man had worked shifts at the pizza bar where he was infected while working alongside a security guard who had contracted the virus at the Peppers Waymouth quarantine hotel in Adelaide's CBD.

Mr Stevens said it was "fair to say that had this person been more upfront with us we would not have instituted a six-day lockdown".

"This is the one element that pushed us from the level of restrictions we were implementing on Tuesday to a much harsher regime," he said.

But he defended the initial lockdown based on the information known at the time.

"I think the actions in the first instance where appropriate … the contact tracing process is not as straightforward as people might expect it to be and the need to act quickly is always there."

He also said authorities did not want to create a culture of fear around disclosing information to contact tracers.

"We are taking a fair and objective approach to this, we don't go in with preconceived ideas from an investigative point of view," he said.

"We would certainly encourage anybody who is being spoken to by our contact traces to be honest and upfront. It is a confidential interview between them and the contact tracer, [we are not] interested in [investigating] information for police purposes."

One new case, already in quarantine

South Australia will persist with its plans to lift its six-day lockdown early after only one new COVID-19 case was detected on Saturday.

The new case is the partner of a previous case and is already in quarantine. "They don't pose any risk at all to the community," said Chief Health Officer Professor Nicola Spurrier.

There were no further cases of undetected community transmission after 19,000 people were tested for COVID-19 on Friday.

South Australian health authorities have identified more than 5400 contacts who are now isolating due to direct links to the cluster.

But Professor Spurrier said SA Health was still working to get in touch with 40 close contacts it had not yet been able to communicate with. "That is a big push today," she said.

Premier Stephen Marshall said South Australians were "absolutely delighted that as of midnight tonight we will be lifting the stay-at-home order".

"I also know that many South Australians were absolutely delighted and relieved yesterday when we announced that people could get out for exercise within their family or household groups for up to two hours per day," he said.

But he said the state was "not out of woods yet".

"The expert health advice we have received is that we are still managing a very dangerous cluster and although we are reducing those restrictions, we are still very concerned about this cluster," he said.

Health authorities are still working to identify and quarantine cases linked to the Parafield cluster but Mr Marshall said it was "great news" there had not been widespread transmission.

"We don't have widespread community transmission and every case can be traced back to its origin," he said.

Mr Stevens said the state was aiming to remove all new restrictions by December 1 if all coronavirus clusters are contained. South Australia would also remove its border restriction with Victoria on that date.

Search for missing surfer called off after board and sail recovered