In a year in which horrible news has been replaced by more horrible news, the job of a political cartoonist is more important than ever.

That's according to the Museum of Australian Democracy, which has named The Sydney Morning Herald and The Age's Cathy Wilcox the political cartoonist of the year. 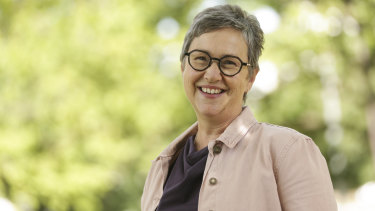 Cartoonist Cathy Wilcox, who also won the prize in 2009 and 2016, said she was honoured to be awarded for the work she had done this year.Credit:Alex Ellinghausen

For Wilcox, the year of bushfires, coronavirus and concerning global politics has required a balance between poking fun at the absurd and putting a spotlight on the ugly.

"We're often here to make light of or point out some sort of folly, but there are always serious things going on that shouldn't be allowed to just get away with being seen as ridiculous," she said.

"It's a way of saying 'Don't become insensitive to that frequent feeling of being punch-drunk from all the horribleness; no, your first instinct is right, it is unacceptable'."

Nobel prize-winning immunologist Professor Peter Doherty, who was one of the external judges for this year's award, said there were parallels between the work he did as a scientist and that of cartoonists, in that they "do their best to tell the truth".

"I've always had the sense that part of the job of the cartoonist in an open democracy is to provoke us, and maybe to make us a bit angry, so that we suddenly have doubts about some entrenched position, some dogmatic idea of how things are, or should be," he said.

Wilcox's award will be announced on Friday at the Museum of Australian Democracy in Old Parliament House. The Behind the Lines exhibition of political cartoons from the year also begins on Friday, and two of Wilcox's cartoons have been selected in the curator's top 10.

Those cartoons are The New Casual, of death arriving at an aged care facility for a casual work shift, and Impunity, one of US President Donald Trump saying he could "shoot 230,000 people in Fifth Avenue and I wouldn't lose any voters".

Museum of Australian Democracy director Daryl Karp said Wilcox managed to find poignant angles in the bushfire disaster and took on COVID-centric humour during the pandemic.

"Nothing about 2020 has been 'business as usual'. Never has a free and accurate media seemed more important, and never have we needed our cartoonists so much," she said.

Wilcox, who also won the prize in 2009 and 2016, said she was honoured to be awarded for the work she had done this year.

"I feel like it's been a hard working year for me, and I feel quite honoured and gratified they noticed," she said.