Antigua: Thousands of protesters have taken to the streets in Guatemala's capital, setting fire to the nation's parliamentary building in a show of anger over a budget bill passed this past week that cut funding for health care and education.

The demonstrations in Guatemala City, which also included peaceful marches in the central plaza, rocked a nation still recovering from back-to-back hurricanes that displaced thousands of people, destroyed homes and obliterated infrastructure. As heavy rains brought on by the second storm pummeled impoverished towns in Guatemala's highlands and coastal regions on Wednesday, the country's Congress passed a budget that cut spending on education and health in favour of increasing lawmakers' meal stipends. 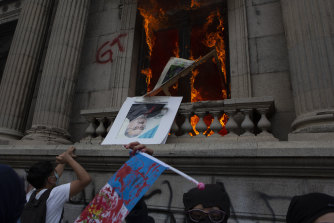 An official photo of former Congress President Eduardo Meyer is thrown out from the Congress building after protesters set a part of the building on fire, in Guatemala City, on Saturday, November 21.Credit:AP

The bill, which also proposed gutting funding to combat malnutrition and slashed funding for the judiciary, set off outrage and led to demonstrations across the country.

One group of protesters kicked in the windows of the Congress building and set a fire that sent flames billowing out of the entrance, social media videos showed. Police officers sprayed tear gas at demonstrators and firefighters quickly put the blaze out, according to local news reports.

On Twitter, Guatemala's president, Alejandro Giammattei, denounced the arson. "We cannot permit public and private property to be vandalised," he said in a tweet, adding that those who committed "criminal acts" would "be punished with the full force of the law." In an attempt to appease demonstrators, the president said in an earlier news release that he was reviewing possible modifications to the budget.

Protesters in Antigua, about an hour's drive west of the capital, said they were enraged at the corruption that has long flourished at every rung of their government. Last year, former president Jimmy Morales ousted a UN-backed commission that had been aggressively investigating high-profile cases of graft.

"The lack of clarity with which Congress approved the budget is the last straw for me," said Antonio Durán, an engineer in Antigua. "The corruption that governments in Guatemala have shown has impacted generations of people — and it's something that we need to stop."