A Florida woman is accused of abandoning a sick 3-month-old on a stranger’s doorstep in a dirty diaper in an exchange caught on the homeowner’s doorbell camera.

Melissa Kelley, 33, allegedly brought the child to a home, placed it on the ground and told a woman there its father would come pick the baby up, Fox 35 reported.

According to audio of the 911 call, the homeowner, Patricia Tillman, did not know Kelley, but later determined the father of the child is her daughter’s 28-year-old boyfriend, Clayton Zinck. 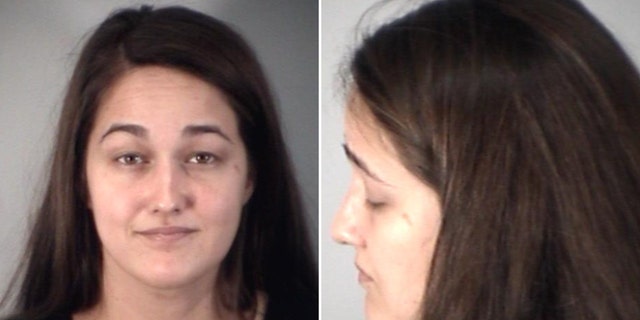 “My daughter is dating her ex-boyfriend, or whatever,” Tillman said during the call. “And she turned back and just left her baby.”

Tillman said the woman at her front door pushed the baby inside and walked away.

When the dispatcher asked if she knew the woman’s name, Tillman replied, “I have no idea who she is.”

After the woman left, Tillman tried to get in touch with her daughter’s boyfriend, Zinck.

Tillman was unable to reach him, so she contacted his parents that night. They said they wouldn’t take the infant or wake Zinck up, according to The Daytona Beach News-Journal.

That same night, Kelley allegedly threatened to kill herself because Zinck had cut off their relationship, according to the paper, prompting police to use her cellphone’s location to find her. They eventually took her into custody in the woods in Astor.

Now Kelley faces charges of unlawful desertion of a child across county lines and child neglect – both third-degree felonies.

She was released Tuesday on $2,000 bond, court records show.

The child is in the Florida Department of Children and Families’ custody and was being treated for scabies at a hospital.

Kelley also was arrested in 2013 on a charge of aggravated battery, court records show.

Record numbers of smokers kick the habit during lockdown