How to get a pint in lockdown: Ale fans ring ahead with pre-orders for takeaway beers to get round pub closures

Ale fans have to ring ahead to pre-order takeaway beers to get round pub closures during the second lockdown.

Pub and bar owners in Manchester appeared to be sticking to the letter of the law on takeaway pints.

Those on a list of venues signed up to the idea were either closed today or else complying with the rules.

At Flok, a ‘vintage and chic bar and kitchen’ in the trendy Northern Quarter, they would normally be offering a selection of wine, Sherry and craft beers. 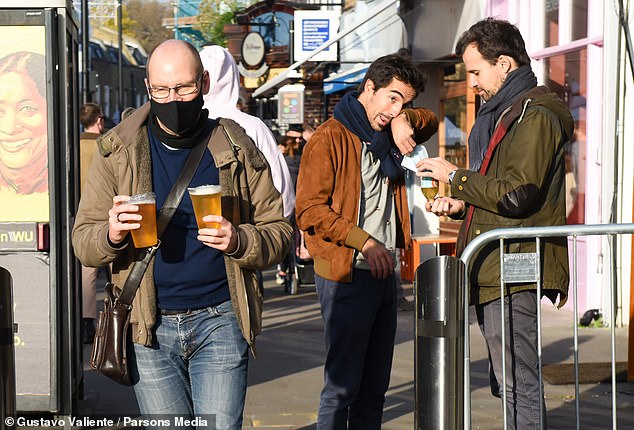 Ale fans have to ring ahead to pre-order takeaway beers to get round pub closures during the second lockdown (pictured, people holding pints in London)

But despite a street market being in full swing outside, there was no chance of enjoying a drink that hadn’t been pre-ordered.

A member of staff said: ‘You’d have to pre-order if you want a takeaway. That’s the rule and that’s what we’re sticking to.

‘To be honest, we’re grateful for any custom we can get in lockdown, so the last thing we’d do is ruin it for ourselves’. 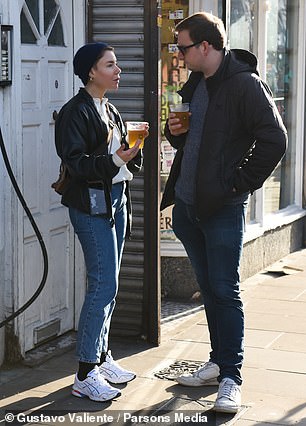 There was no chance of enjoying a drink that hadn’t been pre-ordered (pictured, people drinking beer in London)

Albert’s Schloss, another city centre venue listed as handing out takeaway pints, was actually closed when the MailOnline called.

Further away from the city centre, a notice at the Coal and Cotton in Boothstown, Worsley, guided customers to the rear entrance.

Once there another sign showed them where to queue for orders.

‘If you’ve not pre-ordered we can’t let you have anything, sorry,’ said a member of staff.

There was no one in at The Grocers Micro Pub in Cadishead, but a board outside read: ‘Pre-ordered drinks only. Cans, bottles and growlers’.

Louise Clive, 56, owns the Keg and Comfort micropub in Wolverhampton with her husband.

She said: ‘Since Thursday it’s been really quiet. We have had a few pre-orders today, but I think it will need a while for people to get used to pre-ordering.

‘In the last lockdown people could see what we had on as they walk past or dropped their head in.

‘We had a lot of passing trade. People would pop in if they fancied it on the way back from work. You don’t always think about a beer in advance.’

She added: ‘At the minute people have got their jobs to worry about. They might be tightening their belts and spending less on beer.

‘Everyone seems a bit shell shocked by the lockdown news and hopefully things will pick up next week.’

Lee Faulkner, 42, had cycled in the rain from finishing work in the city centre to pick up four pints of pale ale.

He said: ‘I’m glad to support them in these hard times. I’ve got four pints but won’t have them all today.

‘I’ll be back in time for the second half of the Wolves game and I’ll have a couple on the sofa.

‘I phoned up earlier today to see what ales they had on tap and ordered two of each.

‘I’ve been looking forward to them all day. In the first lockdown I came a lot and it’s great they can continue takeaways.’

He said: ‘I’ve come for two pints of Templar which is a bitter and two of 24 Carat Gold, a pale ale.

‘It’s worth coming here inside of the supermarket, most certainly.

‘I’d like to more regular here if I lived closer. My son lives round the corner and comes often. It was really easy to order. You can phone or order on the website.’

Andy Tinkler, 60, freelance manager of the Stratford Alehouse in Stratford-upon-Avon, said he’d had ‘a really quiet day’ with only half a dozen customers.

He said: ‘It’s been dead today. The owners have stock they’d prefer to sell rather than pour away like ales that won’t last the month.

‘There was a time in the first lockdown when it was sunny and takeaways were really popular.

‘But now you have to order over the phone and people don’t want to drink outside. People have phoned up and collected today.

‘We are fortunate we can reduce our operating costs because we’re a small operation.’

Mr Tinkler added: ‘We survived lockdown and the summer better than most places because we’re flexible. We adapted by switching to table service.

‘It’s good to be able to do takeaways. We are not going to protest about the situation. Everyone has to do their bit.

‘We’ll be able to survive this month. We’re a small community pub with loyal customers.’