"He himself is a member of that group and he is a criminal," army chief of staff General Birhanu Jula said in a televised statement on Thursday local time, before calling for him to be removed. Birhanu did not offer any evidence to support his accusations. 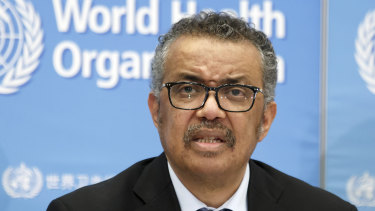 There was no immediate WHO comment on the allegation against Tedros, 55, who is an Ethiopian of Tigrayan ethnicity.

Western diplomats in Geneva said that for now in the absence of any evidence of wrongdoing, there was no rush to judgment or move to challenge Tedros at the WHO.

On Twitter, Britain's ambassador Julian Braithwaite posted a photo of himself and Tedros after a Thursday meeting on the campaign led by WHO and the GAVI vaccine alliance to distribute COVID-19 vaccines, treatments and tests to poor countries. 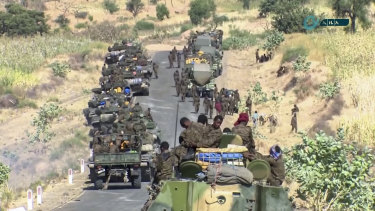 The Ethiopian military gathered on a road in an area near the border of the Tigray and Amhara regions of Ethiopia this week.Credit:AP

The accusations against Tedros came with the WHO under serious strain trying to coordinate global efforts against the COVID-19 pandemic after the United States, its biggest donor, froze funding over a spat involving China. Cases and deaths are rising again in many countries around the world.

Earlier this week, the WHO recorded 65 coronavirus cases among staff members based at its headquarters, despite the agency’s public assertions that there has been no transmission at the Geneva site, the Associated Press reported. The cases involve at least one cluster of infections.

Tedros served as Ethiopia's health minister and foreign minister from 2005-2016 in a ruling coalition led by the Tigray People's Liberation Front. The TPLF effectively ruled Ethiopia for decades as the most powerful part of the coalition, until Prime Minister Ahmed Abiy took office in 2018.

Abiy has since folded the other three regional parties into his own national party, but the TPLF refused to join.

Birhanu accused Tedros of using his international platform to try to get diplomatic support and weapons for the TPLF. 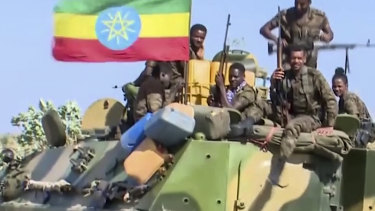 Ethiopian military sitting on an armored personnel carrier next to a national flag, on a road in an area near the border of the Tigray and Amhara regions of Ethiopia.Credit:AP

"He has been doing everything to support them, he has campaigned to get the neighbouring countries to condemn the war. He has worked to facilitate weapons for them (the TPLF)," he said in a televised news conference.

Tedros was elected in 2017 as the WHO's first African director-general on a platform of promoting universal healthcare.

Earlier this year, President Donald Trump announced the United States would leave the WHO in July 2021 after accusing Tedros of not doing enough to hold China to account for what Trump described as initial attempts to cover up the COVID-19 outbreak.

Tedros has dismissed the suggestions, saying: "We are close to every nation, we are colour-blind."

An Ethiopian government air strike injured many university students on Thursday in the Tigray capital of Mekelle, a bastion of the TPLF, the group said in a Facebook post.

The attack took place around 12.45pm local time, the post said, in the Meles Academy University, where "it resulted in heavy casualties of many university students and other civilians." The Facebook message was accompanied by several photos that appeared to show adults with injuries.

Reuters was unable to authenticate the photos or the information; assertions by all sides have been impossible to verify because internet and phone connections to Tigray have been suspended and the government has restricted access.

The government was not immediately available for comment. It has previously denied attacking civilian targets, saying that it has only bombed military installations on the outskirts of Mekelle.