Geoffrey Paschel and Varya Malina’s storyline on 90 Day Fiance: Before the 90 Days was one for the books. After a failed proposal in Russia and a surprise visit to the U.S., it seemed that the couple’s relationship was destined for failure.

What made their journey even more complicated was that Geoffrey’s friend (and ex-girlfriend) Mary Wallace still had feelings for him. Geoffrey thought he knew what he wanted, but it was clear that the feelings were mutual between him and Mary.

Now, it seems that Mary wants the whole world to know that she’s come out on top by posting a snap of her and Geoffrey to her Instagram account with a direct message to share.

In the post, Mary shared a photo of her and Geoffrey smiling with the caption, “Rivalry: defined as…competitions for the same objective or for superiority in the same field. This also means two parties must WILLINGLY subject themselves as EQUALS in the same game.. (I am grown and don’t play games with children).”

The caption continued, “Sorry, I don’t compete. I know my worth and superiority.. and I know.. no one will ever compete/compare to or with me. I’m in it for the long game not the short game. [blue heart emoji]”

Mary then followed the caption with a string of hashtags that included #tryagain, #superior, and #shotsfired. 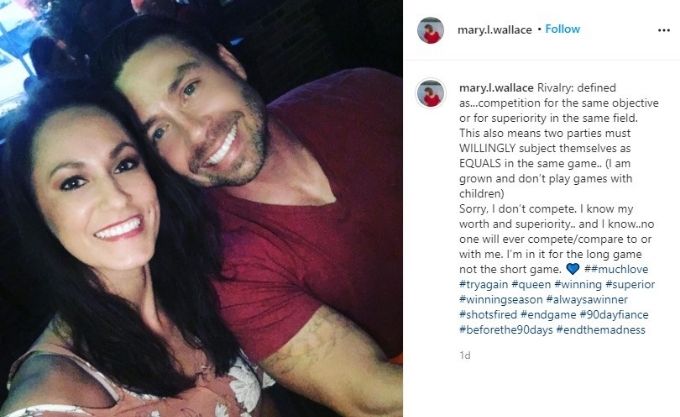 Fans of the show quickly identified that Mary was taking shots at Varya since the two women have engaged in a battle to win Geoffrey’s heart.

During their time on the show, Geoffrey and Varya struggled to make their relationship work.

It started when Geoffrey travelled all the way to Russia to spend some quality time with Varya – with the intention of proposing if all went well by the end of his trip.

From the beginning of the trip, things were awkward and uncomfortable between them. Their first meeting consisted of a silent car ride to the hotel where Geoffrey was staying and some idle chit-chat about mountains and nature.

The trip didn’t really seem to get any better from there. It turned out that Geoffrey waited until he met Varya in person to tell her about his criminal history, which included prison time for drug-related charges.

By the end of the trip, Geoffrey thought that he and Varya had cleared enough of the air and decided to propose to her before he left. What he didn’t anticipate was that she would reject him saying that the answer was no “right now.” Geoffrey ended up going back to the U.S. with a bruised ego and no clarity about where their relationship stood.

From Varya’s perspective, she and Geoffrey hadn’t ended their relationship after she turned down his initial proposal. And, after Geoffrey ghosted Varya for some time, she decided that she would take matters into her own hands and pay Geoffrey a visit in the U.S.

She surprised him by showing up at his door unannounced. When he answered, she was elated to see him until she noticed that Mary was there in the house with him. It turned out that after the disastrous trip to Russia that Geoffrey decided to give his relationship with Mary another chance.

And this is where the rivalry between the two women really began. Since that time, there’s been banter back and forth with both women vying for Geoffrey’s attention and for the longest time, it seemed unclear if Geoffrey was with Mary or if he was with Varya.

It seems that Geoffrey has made up his mind now, but fans wonder how long this will last.

90 Day Fiance: Before the 90 Days is currently on hiatus at TLC.

Utah police officer allegedly abducted relative, feared he was 'being watched by an unknown organization'