Late-night is expected to get a little bit sillier in 2021.

Remember when the late-night shows did daft sketches with celebrities, focused on strange local news or, not to get too political, made fun of the color of the President’s suit?

There is a prediction from a swathe of late-night writers and showrunners that Deadline has spoken to that many of these shows will now devote more time to the offbeat comedy that many of them trafficked in before Donald Trump ran for, and became President of the United States.

“We deserve to have some frivolity in our lives,” one late-night showrunner told Deadline.

“I’m looking forward to the field opening up comedically, where we can do jokes about the President or we can take a day off from doing jokes about the President because not everything is an emergency all of a sudden,” said Alex Baze, head writer of Late Night with Seth Meyers. “We can talk about the new movie that came out and make fun of that for three days, that’s what I’m looking forward to.”

Late Night with Seth Meyers is a perfect example of an evening comedy show that became exponentially more political over the last four years. The NBC show, which launched in 2014, started out with sketches about things like New York’s pizza rat and sinkholes and more of a variety feel. Baze, speaking a few days before the election on the Late Night podcast, admitted that the show was “very experimental” and “bizarre” before Meyers’ A Closer Look segments began to ramp up and become a regular segment on the show.

Late Night writer Karen Chee told Deadline that the writing staff was now “super excited” about getting to do more jokes that aren’t all focused on Donald Trump. “Everybody would agree that the idea of 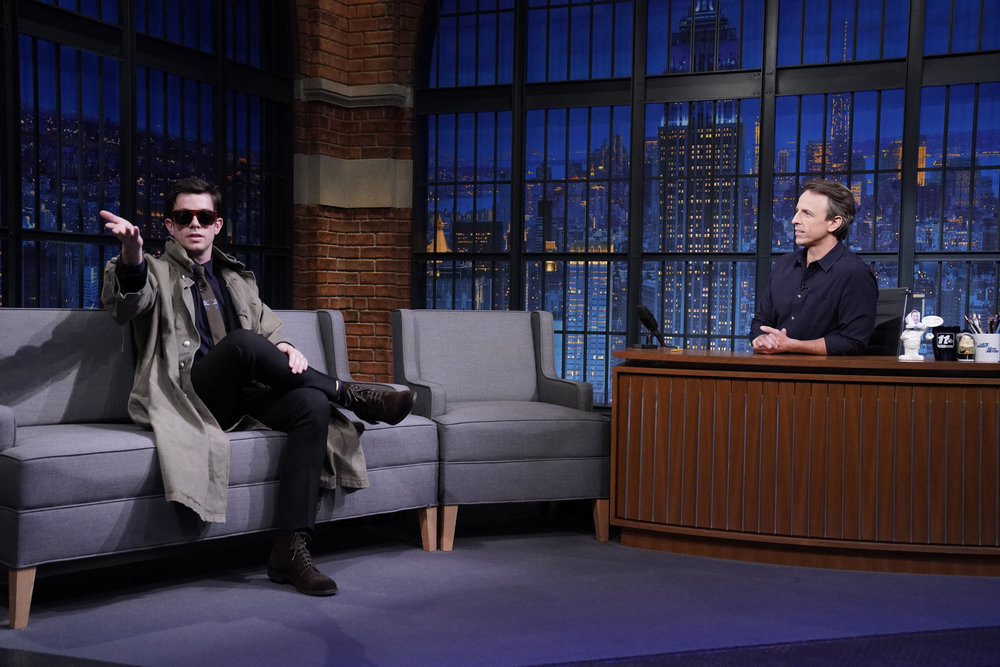 Trump being good for comedy is a lie and now that he will be out of office, we get to do jokes about so many more topics, which is really exciting. There’ll be a diversity of thought that will probably crop on our show,” she said.

Does anything point to a silly focus more than the hiring of Kid Gorgeous, John Mulaney (left), as a full-time staff writer on the show?

Meyers’ NBC colleague Jimmy Fallon, who along with The Late Late Show’s James Corden, has historically leant towards the variety end of late-night. However, he didn’t let the election get in the way of signing a deal extension with news of his renewal emerging the week before the Presidential contest.

The Tonight Show has seen the most fluctuation in terms of ratings over the course of the Trump administration. The show is now behind The Late Show with Stephen Colbert and has recently been in more of a ratings battle with Jimmy Kimmel Live! for the second spot.

Fallon like all of the other hosts has improved his impression of Donald Trump over the last four years. However, he is still seemingly more comfortable with silly. While this week’s Trump takedowns have been some of his most popular videos online, sketches have also included playing a round of golf with a twist with Michael Strahan (see below) and a call out for kids that can rap.

The weight of political comedy and The Tonight Show was also in the news last week with the exit of head writer Rebecca Drysdale. While she said that her exit was mutual and unrelated to politics, she also wrote a private note on social media where she vowed never to write jokes about Trump again.

Meanwhile, Colbert was visibly overjoyed at the fact that he would no longer have to do his Donald Trump impression.

Speaking on the CBS show this week, he said he was looking forward to shifting the nation’s collective focus away from him.

“I’m looking forward to possibly people being nicer, including me. One of the things that I found about this job was I tend to reflect back the national tone and that tone comes from the top. The President’s only emotions are anger, look at me and I’m angry you’re not looking at me. Because he was the only thing we were focused on for the last four years, and this is entirely my responsibility, I’ve done harsher jokes than I’ve ever done in my life. That’s why they say don’t wrestle with a pig, because you’ll both end up filthy and the pig enjoys it. And your pig impression really hasn’t got any better in the last four years,” he added.

The Late Late Show has also become more political as the administration went on. Brit James Corden has taken his own shots at the President, although it’s clear that the CBS show is at its best when the Gavin & Stacey co-creator is singing, dancing or goofing around with A-listers in a series of standalone segments. COVID-19 hasn’t helped, meaning that Corden has been unable to drive off with new Carpool Karaoke guests, but it’s clear from speaking to those around the show that they are itching to get back to conceiving weird and wonderful variety sketches and moments that go viral. “We don’t have to listen to [Trump] anymore,” said Corden on the show this week as he launched into a gag about Lord of the Rings.

Jimmy Kimmel is an interesting case study for the changing nature of late-night. Before Trump, Kimmel was widely seen as an apolitical comedian, in the vein of David Letterman. However, after the birth of his son, who was born with a congenital heart defect and underwent open heart surgery when he was only a few days old, saw him become an ardent supporter of universal health care coverage, taking on the issue of the Graham-Cassidy bill in 2017. He carried on in this spirit with gun control and Roy Moore and continued to hold Trump’s fingers to the fire so it will be interesting to see how his ABC show progresses over the next twelve months.

Then there’s the cable shows such as The Daily Show with Trevor Noah, Full Frontal with Sam Bee and Last Week Tonight with John Oliver that by their very nature are more political than the broadcast shows.

Having said all of this, Trump is still in office until January and will likely be a major political figure for years to come, whatever he does next. One showrunner who has run shows during Presidential changeovers also warned that an immediate pivot to silly is unlikely to be strategic. “There wasn’t really a need for a formal change because you’re just reacting to what the world is providing every day. Over time, patterns would emerge but it’s not thought about much in a strategic way, it’s much more instinctual than that,” the exec said.

It will also be interesting to see how new entrants to the late-night genre such as Sam Jay on HBO and Ziwe on Showtime fare, while the likes of NBC’s A Little Late with Lilly Singh, Showtime’s Desus & Mero and The Amber Ruffin Show are also still in their infancy.

“People are exhausted,” said one showrunner. “While it’s true more people than ever voted, I think people might also be looking for more fun stuff to watch and whether they look to late-night for that is a bigger question.”

Deadline is shining a spotlight on some of the most exciting writers to rise up on the late-night beat. Who are the scribes that will go on to run shows, host, perform and create the hottest comedies on TV and film? 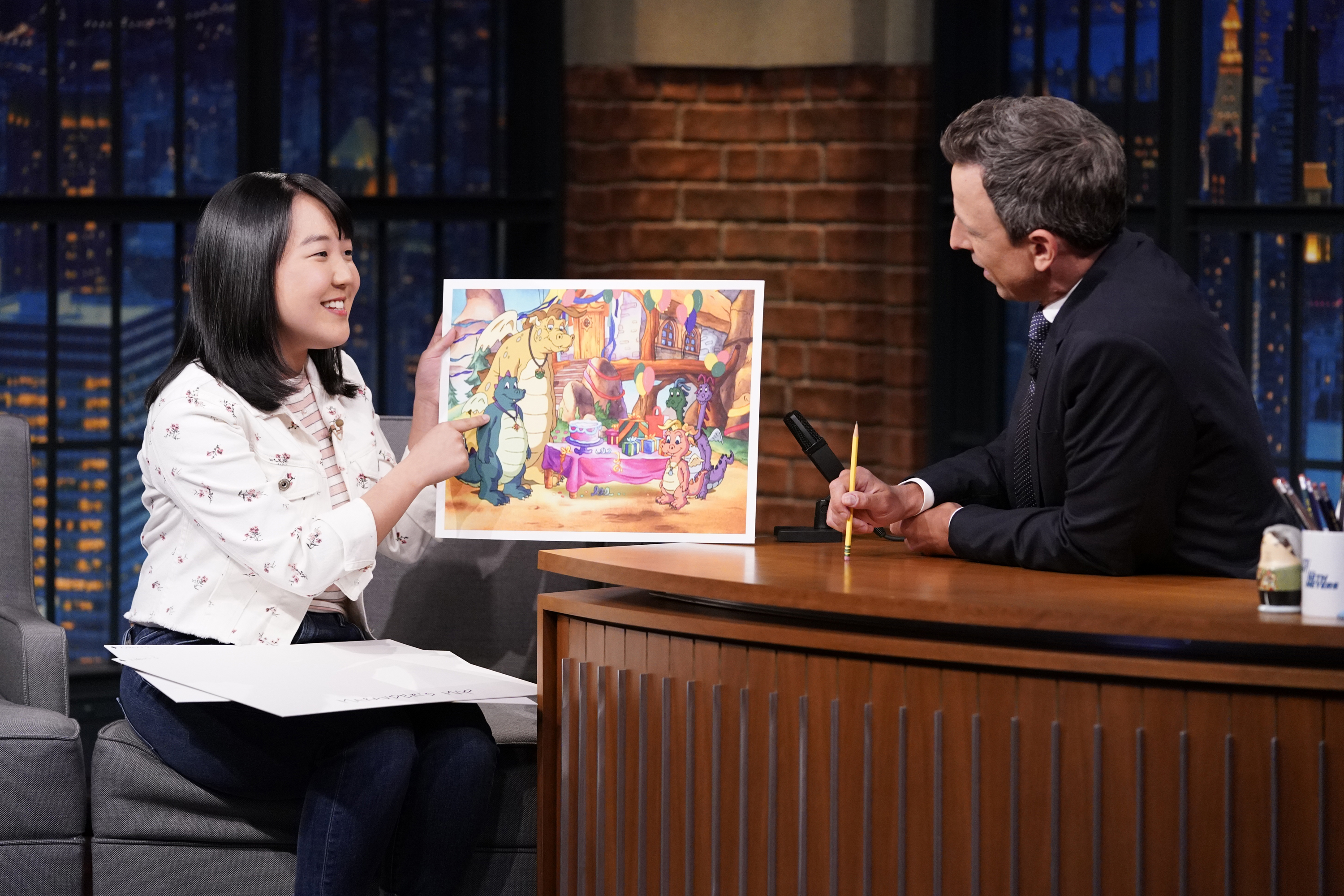 This week’s focus is on Late Night with Seth Meyers’ writer Karen Chee.

Chee is one of the younger members of the Late Night room, a millennial, if you will. She is the reason that Meyers now knows what the VeggieTales are and who Kit Kittredge is.

Joining the show in January 2019, Chee has always been a fan of late-night television. “When I was trying to figure out whether to move to New York or LA, I moved to New York because I was really hoping to get to write for late night TV,” she said.

She has also been seen on screen in a number of skits including celebrating Parasite’s Oscar wins and in a strand known as What Does Karen Know (see below).

“I always feel like I should write a thank you card to people after I’ve been on the show, it’s really nice. I mostly write for the monologue team so we’re writing specifically for Seth’s voice but if there’s anything I feel particularly excited about or would lend itself to a lot of jokes but wouldn’t be right coming from Seth, he, Mike Shoemaker and Alex Baze are really nice about letting the writers come on the show and deliver it themselves,” she said.

“I don’t know the psychology behind it but I would assume it has something to do with the fact that Seth is a writer first in addition to being a performer so he’s coming at things from a ‘what is funny’ angle not a ‘how can I be the center of attention’ angle so he doesn’t mind who is delivering the joke as long as the joke is very funny.”

The Late Night writers have largely been working virtually since the COVID-19 pandemic began. However, while most of her colleagues have been locked down in Manhattan and Brooklyn, Chee has been slightly further afield. For family reasons, she travelled to Korea, which has seen her working at odd times of day, but has given her a new perspective.

“I’m still working on east coast times. It’s weird scheduling,” she said. “People in other countries, in my experience, know a lot more about the U.S. than the U.S. knows about other countries.”

Outside of Late Night, Chee has also been working on a number of other projects, including writing on Amazon’s upcoming comedy special Yearly Departed. “It was really fun, I was doing that in tandem with Late Night for a few weeks. I would like to do more narrative things, I’m working on a few projects that hope to get made. A really nice thing about late night is every day is a brand new day. So on monologues, if I’ve had a really good day or a really bad day, the following day you start from scratch, whereas with narrative, you get to really sit with these characters and see where it’s going and how they react to each other and it’s an ongoing process, which is very rewarding in a different way.”

She’s also keen to be on screen more. “Before the pandemic, I was doing a lot of stand up and that got me to do a few acting things and I’d love to do more of that. I’m just a huge fan of comedy so if I get to do it in any form, I’m very excited,” she added.

But, for now, she’s also still enjoying the late-night world. “It’s such a wonderful job, it’s really fun, everyone on the show, the whole writing staff is full of very genuine and supportive people so I feel very comfortable pitching ideas and submitting sketches without feeling worried that I’d be bullied or shunned in anyway.”