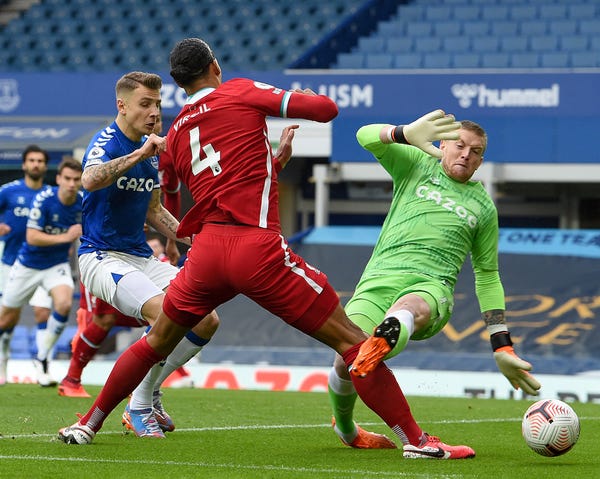 Liverpool FC's Virgil van Dijk is expected to be ruled out for the rest of the season after finding himself on the end of a horror challenge in Saturday's Merseyside derby.

The Dutch defender was clattered by Everton keeper Jordan Pickford in just the seventh minute, forcing him off the field.

Liverpool has since confirmed Van Dijk will undergo surgery on damaged knee ligaments, with Sportsmail reporting the 29-year-old is now unlikely to play again this term.

Liverpool not the same beast without Van Dijk

The Reds may have marched to the Premier League title with relative ease last season, but Van Dijk's absence will prove a big hindrance in Klopp's side repeating that feat.

Since joining the club from Southampton in January 2018, Liverpool have boasted a win percentage of 70.5% with Van Dijk in the starting line-up, and have conceded an average of just 0.94 goals per game.

Without the Dutchman, however, Klopp's men have won just 42.9% of their games and conceded an average of 1.57 goals.

"Defensively, headers won, you've lost a passer, you've lost a goalscorer. Every part of his game is a huge loss to Liverpool, and to find a replacement is impossible because he is the best defender in the world."

Cascarino added: "It's a huge blow that I don't think [Liverpool] will overcome. I think it will cost them the title."

The former Liverpool defender Jamie Carragher believes the same, telling Sky Sports: "The big question is: can Liverpool win the league without Van Dijk there?

"Every team has three or four players in every title-winning team and if one of those players is missing, no matter how good your manager is, no matter how big your squad is, you can't cover for them.

"I think it blows the title race wide open. I felt at the start of the season that Liverpool were the team to beat and with Van Dijk being out for what looks like the whole season now, I think it's going to be all on for Liverpool."

Liverpool next takes on Ajax in the Champions League on Wednesday, before hosting Sheffield United in the Premier League on October 24. 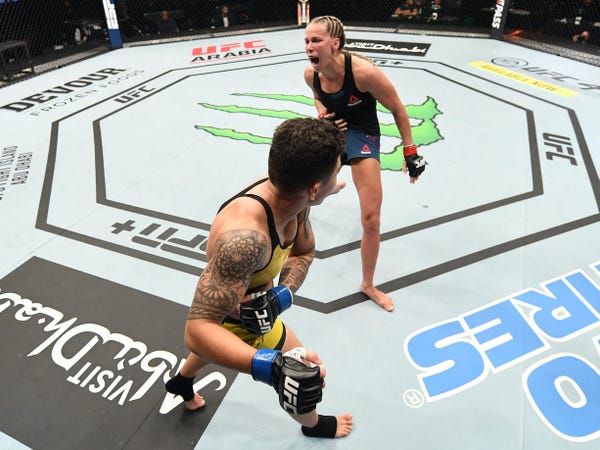 FIGHT ISLAND — Video footage from a UFC women's flyweight match shows the devastating, fight-ending effect a huge shot to the body can have.

It all went down during the co-main event between Jessica Andrade and Katlyn Chookagian. They fought behind-closed-doors Saturday at the Flash Forum on Fight Island, a quarantined area the Abu Dhabi culture and tourism board purpose-built in conjunction with the UFC.

Andrade made history by becoming the first woman in the UFC to win in three separate weight classes when she defeated Chookagian in the opening round of their 125-pound bout.

Chookagian had advantages of height and reach but Andrade ensured that mattered little by closing the distance between the fighters, engaging in clinches against the fence, and dragging her opponent to the ground.

Andrade varied her strikes. She landed shots on Chookagian's head and body in equal measure, setting up a buzzer-beating finish.

The ending arrived when Andrade landed a body punch which made Chookagian retreat and turn her back on the fight and her opponent.

After a moment of confusion as it was not clear whether the fight was over, Andrade ran at Chookagian and sought the stoppage. 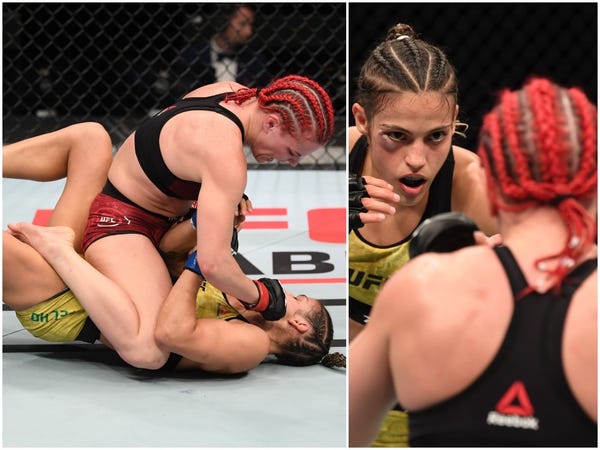 FIGHT ISLAND — Gillian Robertson messed up her opponent's eye during a UFC bout on Saturday and said later that she was really happy she did it.

Robertson, 25, is one of the most impressive mat-based fighters in the UFC and has already broken a Ronda Rousey record.

The Canadian fought a women's flyweight match with Poliana Botelho, who didn't allow her to extend her haul of four UFC submission wins to date.

Robertson said after the win that she was frustrated not to get the finish, but with 10 minutes and 53 seconds of ground control in a 15-minute fight, it is clear she was still dominant at the Flash Forum in Abu Dhabi. 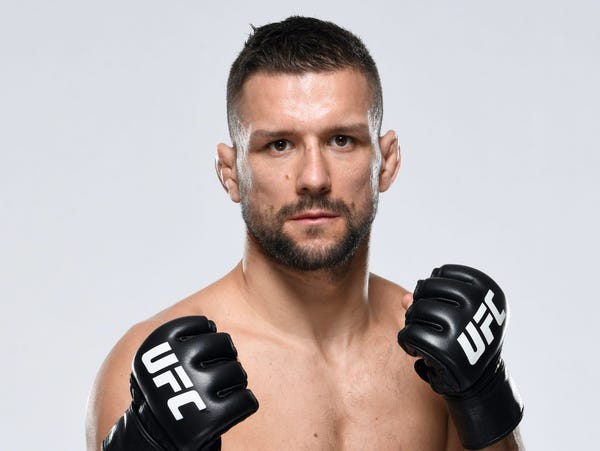 But if the UFC's previous pandemic-era cards are anything to go by, there will likely be a few matches and performances earlier in the event which have the potential to steal the show.

According to the former UFC welterweight title challenger Dan Hardy, who is now a UFC analyst and color commentator, the unbeaten Polish fighter Mateusz Gamrot has the potential to create headlines this weekend.

"We've got some really interesting fights on this card and the one I'm watching out for the most is Mateusz Gamrot because he's an undefeated fighter, 17-0, and making his UFC debut," Hardy told Insider this week.

Of Gamrot's 17 wins, eight have been as a result of a decision, on top of five knockouts, and four submissions.

Through much of Gamrot's eight-year career, he competed in KSW, the premiere mixed martial arts organization in his native Poland.

The 29-year-old championed two weight classes at KSW, has a notable pair of victories over the former UFC athlete Norman Parke, and is one of the top pound-for-pound fighters in Europe, according to MMA Fighting.

On Saturday, Gamrot competes in a lightweight match against Guram Kutateladze, a Georgian with a pro record of 11 wins (seven knockouts, one submission, and three decisions) against two losses.

"The guy he's fighting, I know he's got a few losses on his record but he's a lethal striker as well," Hardy said.

"Gamrot is a huge wrestler with a boxing skillset, and then we've got a fighter coming in who has got excellent Muay Thai who is going to really challenge him and not give him the respect most people would.

"That's the sleeper fight for me on the card."

The UFC Fight Island 6 show is an 11-fight card, and will be broadcast on ESPN in the US and BT Sport in the UK. 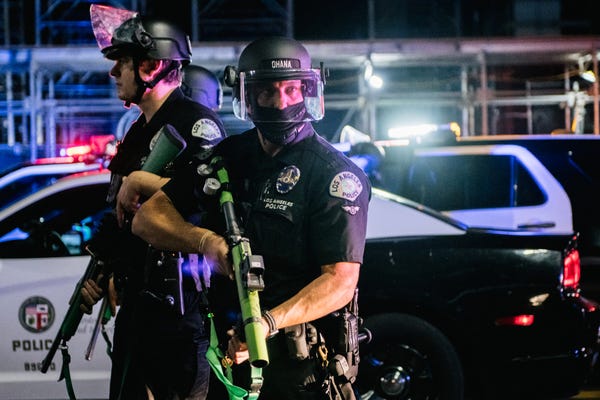 76 people were arrested, over 30 buildings were damaged, and eight police officers were injured after celebrations of the Los Angeles Lakers NBA title win in the city turned "confrontational" and "violent."

The Los Angeles Police Department (LAPD) said around 1,000 people gathered outside the Staples Center on Sunday night after the Lakers beat the Miami Heat and things turned ugly when a number of "unruly individuals" mixed into the crowd and threw glass bottles, rocks, and other projectiles at officers.

After trying to disperse the crowd, a portion of the group broke off and began "vandalizing businesses" and continuing to engage in violent behaviour towards officers, police said.

Two of the members of the crowd were injured by "less lethal munitions" — an alternate term for rubber bullets — fired by officers and were taken to local hospitals, while eight officers also received medical treatment.

Arrests were made for vandalism, assault on a officer, and failure to disperse.

Los Angeles Mayor Eric Garcetti tweeted on Monday to thank those who celebrated at home, but said that "vandalism of businesses and public places, and causing harm to our officers will not be tolerated." 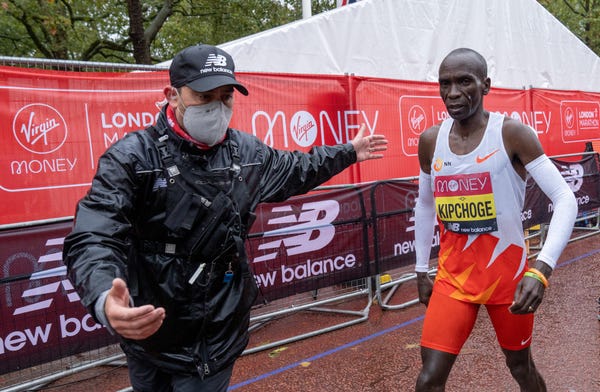 Eliud Kipchoge won the 2019 London Marathon by producing the second fastest marathon time in history, however, this year, the Kenyan superstar could only muster an eighth place finish.

The reason? A blocked ear.

What abandoned Olympic venues from around the world look like today

Wannabe Olympians can now apply online for the US bobsled and skeleton team because of the coronavirus pandemic, and the response has been huge

Olympic volleyball star Kerri Walsh Jennings said foregoing a mask is 'an exercise in bravery,' then doubled down in a non-apology