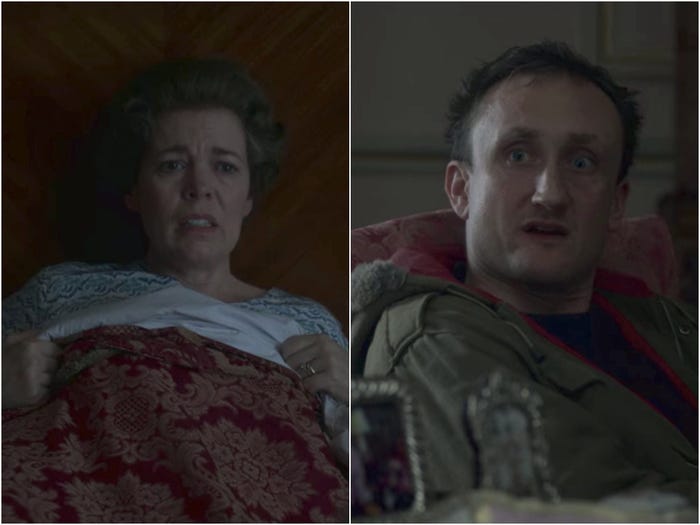 Warning: Spoilers ahead for season four of Netflix's "The Crown."

On July 9, 1982, Buckingham Palace faced one of its biggest security breaches in modern history.

Michael Fagan, an unemployed house painter, broke into the royal residence and entered the Queen's bedroom, where he is said to have exchanged a few quick words with Her Majesty before security arrived.

The incident was portrayed in the fourth season of Netflix's "The Crown." In the episode, titled "Fagan," the show gets many details correct. For instance, it shows Fagan (Tom Brooke) successfully breaking into the London palace not once, but twice.

He managed to scale the palace gates, climb up a drain pipe, and climb through a window into the palace. The first time, in June 1982, he wandered around and left without being caught. The second time, a month later, he found Her Majesty's sleeping chambers and was apprehended by the authorities.

However, it's fair to say the show took some creative liberties when adapting Fagan and the monarch's interaction for the screen.

Here's how the show's depiction compares to what really happened.

The Queen and Michael Fagan's interaction is portrayed in a somewhat lighthearted way on 'The Crown,' but this isn't how it played out in real life

The episode shows Fagan enter Queen Elizabeth's room while the monarch is sleeping in bed. Elizabeth (Olivia Colman) doesn't realize an intruder is there until Fagan opens the curtains and sits on the edge of the bed.

A startled Elizabeth demands that Fagan leave, which he refuses. She then tries to telephone for help, but he stops her before she can dial a number.

It's after this that the scene almost becomes comedic, with a couple of amusing lines of dialogue between the pair.

Fagan asks the Queen if she has a cigarette handy, to which the monarch snaps: "No, filthy habit."

"I know, I know," Fagan responds. "I just thought it might be good for you to meet someone normal who can tell it to you how it is."

"I meet normal people all the time," she responds.

"No, you don't," Fagan says. "Everyone you meet is on best behavior."

In reality, however, Fagan and Elizabeth didn't actually speak for very long, and the intruder didn't wake the Queen.

"She was wide awake when I got in there," Fagan recently told The Sun of the incident. "She sat up in bed and said, 'What are you doing here?' and then went off to fetch someone."

Fagan told The Sun he never asked the Queen for a cigarette, as it would have "been cheeky and disrespectful and something I just wouldn't do."

According to Vanity Fair, Her Majesty called the palace's telephonist to request that they send the police to her room, and then made a second call six minutes later after the police still hadn't arrived. She was ultimately able to find a maid, who guided Fagan "into a nearby pantry on the pretext of supplying him with a cigarette," the publication reports.

The Queen's footman was then summoned, and was able to keep Fagan occupied — by giving him a Scotch — until the authorities arrived.

It has been reported that Fagan had a 10-minute conversation with the monarch before he was ushered to another room. However, in a 2012 interview with The Independent, Fagan disputed claims that they had a long conversation.

"Nah! She went past me and ran out of the room; her little bare feet running across the floor," he said.

In the show's version of events, the Queen didn't leave the room, and she didn't steer Fagan away into another room. She remained speaking with the intruder until a housekeeper arrived with her morning tea, after which security was alerted. The authorities then arrived to apprehend Fagan.

Margaret Thatcher was the motivation behind the break-in on the show, however there were other factors involved in real life

In the episode, Fagan wanted to break into the palace so he could share his concerns with the Queen about the then-Prime Minister, Margaret Thatcher. He blamed Thatcher for the rising unemployment rate in Britain at the time.

The show portrayed Fagan as being unemployed with a crumbling family life — his wife had left him, and it was later ruled that she would have sole custody of their children.

In real life, the story was a little different.

According to The Sun, Fagan was "was feeling depressed after his wife Christine ran off and left him to bring up their four young children, so he set off to see if Her Majesty could solve his problems."

Speaking to The Independent, Fagan said he didn't know why he broke in the first time: "I don't know why I did it, something just got into my head."

Then, addressing his second break-in, he added: "I went back because I thought 'that's naughty, that's naughty that I can walk round there.'"

He also suggested to the publication that he had been high on magic mushrooms at the time.

"I forgot you're only supposed to take a little handful," he said. "Two years later I was still coming down. I was high on mushrooms for a long, long time."

It's not clear whether Thatcher was part of the real reason for Fagan's break-in.

It's likely decided the show chose to make Fagan's disdain for Thatcher the motivation for the break-in to add more tension to the prime minister and the Queen's relationship.

Despite the women being of a similar age and dealing with similar issues — balancing leadership positions with motherhood and married life — the show portrays their relationship as strained.

According to royal expert Hugo Vickers, however, the monarch and Thatcher got along much better than the series shows.

"As far as the Queen and Mrs. Thatcher are concerned, I can assure you that the Queen goes out of her way to get along with all of her elected prime ministers," Vickers previously told Insider. "Maybe they weren't the closest of friends, but they had a close working relationship."

Fagan spent time at a psychiatric hospital following the incident

At the end of the episode, "The Crown" shows photos of the real Fagan and says he was "committed indefinitely" to a psychiatric hospital after breaking into Buckingham Palace, spending three months there.

According to The Washington Post, Fagan did end up in a psychiatric hospital after the incident, and "was in and out of jail on drug and other charges" in the years after.

But Fagan didn't serve any jail time for breaking into Buckingham Palace.

Fagan was charged with burglary for the first break-in — when he had stolen a bottle of wine, and was later acquitted by a London jury — but technically hadn't committed a crime when he broke into the palace the second time and met the Queen.

"Palace spokesmen explained that he had done nothing more serious than trespassing on private property, which in Britain is a violation of civil law but not a crime," The New York Times reported in September 1982.

Today, Fagan lives in London and recently recovered from the coronavirus, according to The Washington Post.

Buckingham Palace did not immediately respond to Insider's request for comment.