As if Rudy Giuliani’s 2020 couldn’t get worse, he’s now getting dragged for having hair dye dripping down his face during an off the rails voter fraud news conference.

Rudy Giuliani ended up trending at the top of Twitter on Nov. 19 for all the wrong reasons. He spun wildly unfounded voter fraud conspiracies to claim the 2020 presidential election was stolen from Donald Trump, 74. But even his hair seemed to want nothing to do with him, as dark streaks of dye came dripping down the sides of his sweaty cheeks from his hairline. Rudy got massively trolled about it on Twitter, from The View panelist Meghan McCain, to Four Seasons Total Landscaping outside Philadelphia, where the 76-year-old held the bizarre Nov. 7 news conference to announce Trump’s election fraud lawsuits.

Meghan referenced the scene in the Borat sequel where the character’s teenage daughter Tutar managed to get Rudy alone in a hotel bedroom after an interview, with him accepting her offer of drinks. Rudy the unzipped his pants and put his hand down them while caught on tape. Meghan, 36, tweeted, “And I thought Giuliani unzipping his pants on camera for Borat’s daughter was going to be his peak embarrassment for 2020… Also how hot is it in that room?!?!” 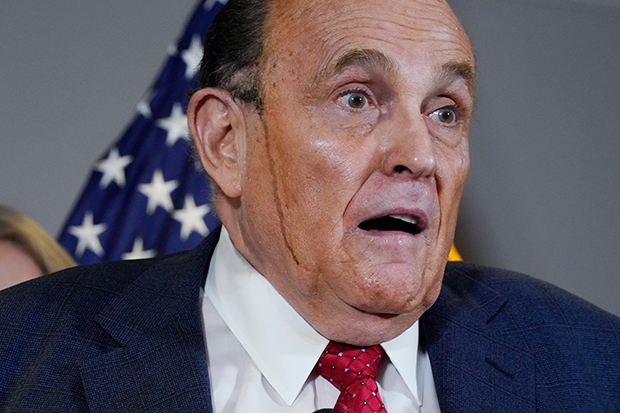 Rudy has been the subject of so many cringeworthy moments lately. In addition to hair dye seeming to drip down his sweaty face and his awkward moments in the Borat film, the former NYC mayor was mocked by Four Seasons Total Landscaping. Rudy infamously held a hastily called news conference on the morning of Sat. Nov. 7 to claim widespread voting fraud on behalf of his client Trump, which was to be held at the Philadelphia Four Seasons. But the high end hotel refused to have anything to do with the event, which was then bizarrely moved to the exterior Four Seasons Total Landscaping building outside of town, next to a sex toy shop and across from a mortuary. The company trolled Rudy about his epic hair fail following his Nov. 19 news conference:

President-Elect Joe Biden‘s spokesman Michael Gwin slammed Rudy’s bizarre claims during the news conference, and then later mocked his hair dye fail. He said in a statement, “Yet another Rudy Giuliani spectacle exposes, as his appearances always do, the absurdity of Donald Trump’s thoroughly discredited claims of voter fraud.” Gwin continued, “Numerous courts, election officials from both parties, and even officials within Trump’s own administration, have all reaffirmed that claims of widespread voter fraud are categorically false.”

Gwin then later trolled Rudy, tweeting out a photo of hair dye dripping down his face with a link to a Daily Beast article about the former mayor’s unhinged press conference. In the caption Gwin wrote, “ICYMI >>> @thedailybeast: “Rudy Giuliani’s Hair Dye Streaks Down Face After ‘My Cousin Vinny’ Performance.” It’s good to know our incoming president’s spokesman has a great sense of humor.

Princess Madeleine Dresses Up with Kids for Halloween — Including One Royally Appropriate Costume!